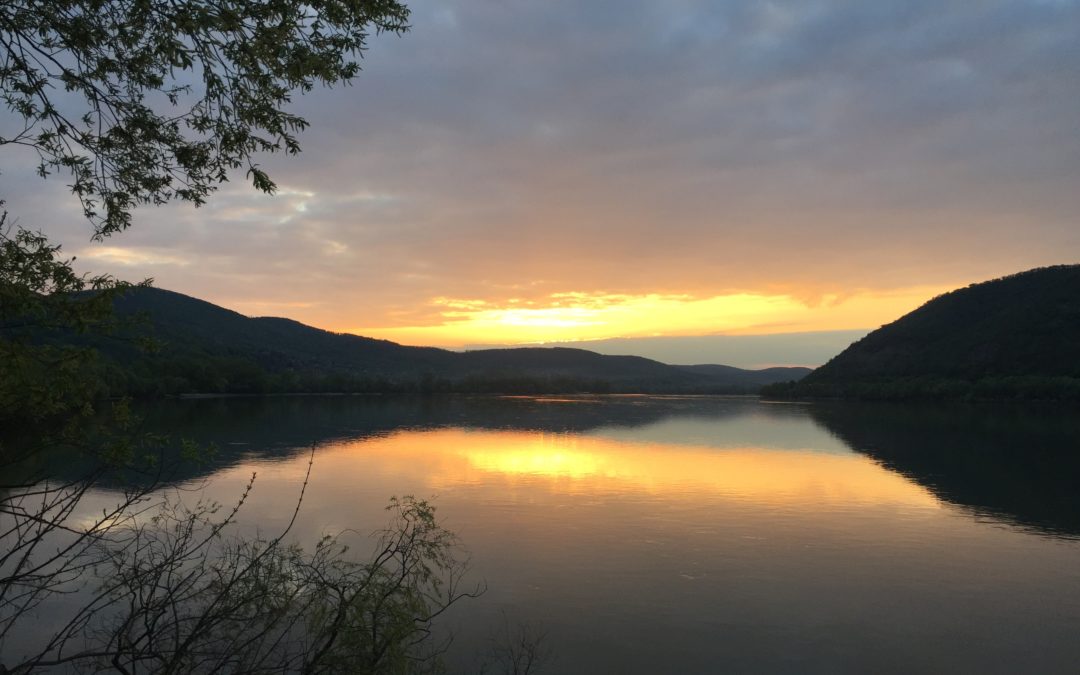 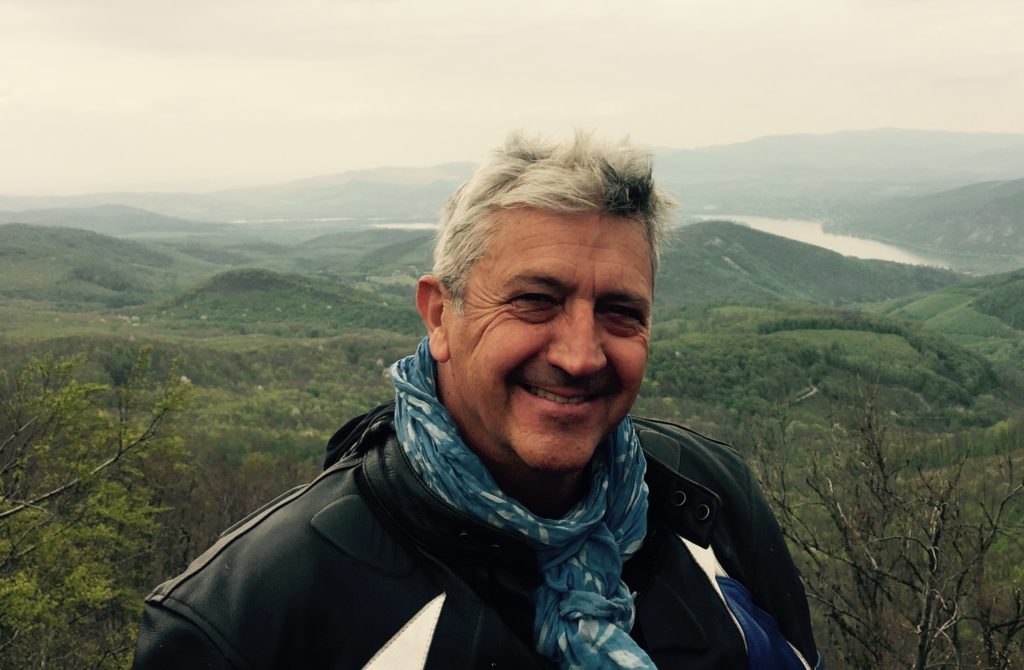 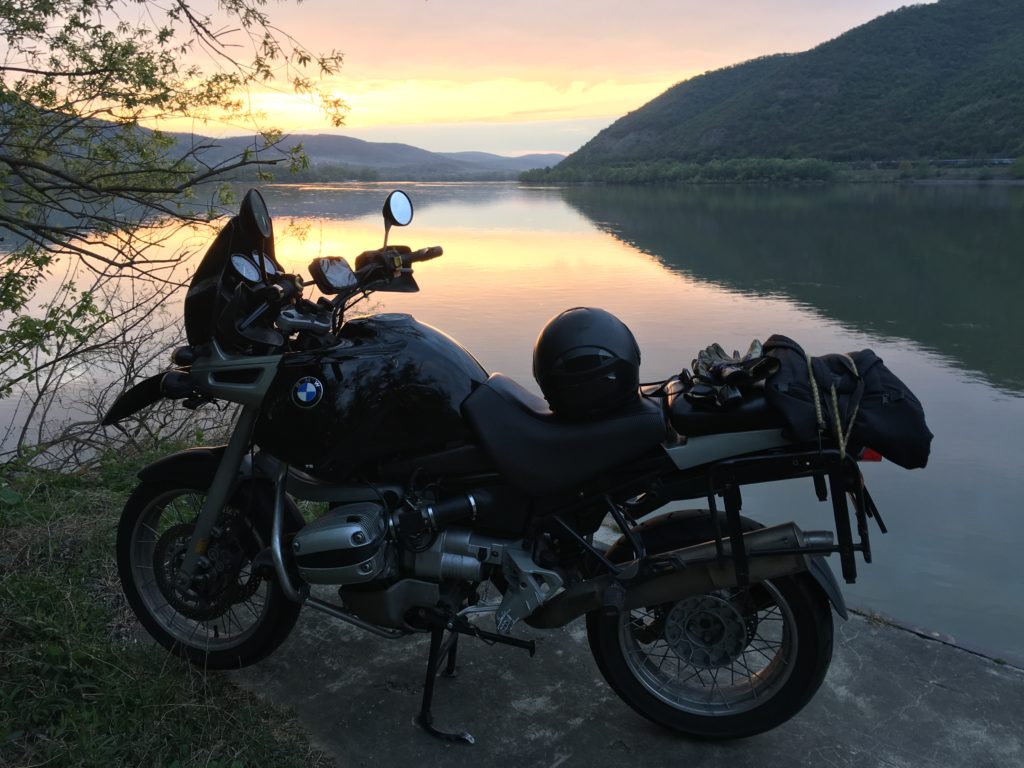 I picked up Angie in a nice cottage house – style hotel, in a remote area outside the city in the Buda hills where lucky locals live. It was a foggy day but because Angie had a direct taxi ride from the airport the night before, poor her did not see nothing of the beautiful city yet. So first we had a panorama view from the Citadel and because we were already on Gellért Hill, I decided to drive past the Kelenhegyi Painters’ Studio Apartment House  where I always wanted to get in somehow to admire this special but modest beauty. Angie immediately could appreciate the beautiful piece of architecture so I parked up in the same second especially because the gate was wide open. We silently creeped to the main entrance and guess what! … we could sneak in! 🙂 So we discovered the staircase, but we felt a little disappointed because all the corridor doors were closed so only the quite plain but elegant staircase was left to our eyes. We left the building through the other side door that opened to the other end of the garden and strolled back towards the gate. When we turned once more back we saw those corridors from outside where we could’t get in and took a last glance at the building that was very pretty but different looking than the street facade. How charming but still imposing piece!

Right before we would have jumped back to the jeep by having a really last look back, I recognized a very hidden door on the front side that was even overgrown by the surrounding bushes and trees. We ran back and after battling ourselves through the plants we looked through the dirty double window where I could hardly but see an elderly charming men painting a canvas on a tray…

NO, we DID NOT miss the chance 😉 to knock on the window of the door.

It turned out that we were face to face with an acknowledged, famous contemporary painter. He very kindly invited us inside after explaining him what was our dream: to have an inner sight into the building..it could be anything!

He did not just show us his very high ceiling studio but also he showed us around in the apartment and introduced us to his wife too. She was an extremely sweet lady who couldn’t stop saying one sentence in different ways: ‘You two are so beautiful young ladies.’ She was just simply adorable.

He told us a lot about his works and his whole lifetime career and wouldn’t have stopped if we had endless time. He even wrote few words and dedicated one of his catalogues to both of us..

..but our tour must went on. Without planning it was obvious to me that we also pop into the Gellért Bath to see at least the main hall and its dome! Angie went crazy in there, especially because she loved the flower motives all around.

We took few photos and carried on while telling her about our famous bathing culture and all of our famous other baths in Budapest. We also discussed and agreed on that even ‘swimming pools’ were built in this breathtaking style and that people had a much more delicate taste that time when art nouveau was a popular style.

If we were architects we would bring it all back!

Soon we crossed the river and arrived to the Pest side of the city and along with showing her what only the ‘birds can see’ 😉 as once the most famous Hungarian secessionist architect said. Angie could hardly stop taking photos of the building’s roof.

We also had a look on few other beautiful pieces and finally finished with a nice coffee at the most unique café of the city sipping it all from a minimum 100 year old armchair. Not for sale! The owners are the greatest art nouveau/art deco art collectors of Hungary, I suppose. Luckily they are not hiding it from the audience, but put the whole huge collection on show..so anybody can enjoy!

Thanks for choosing us, Angie! 🙂 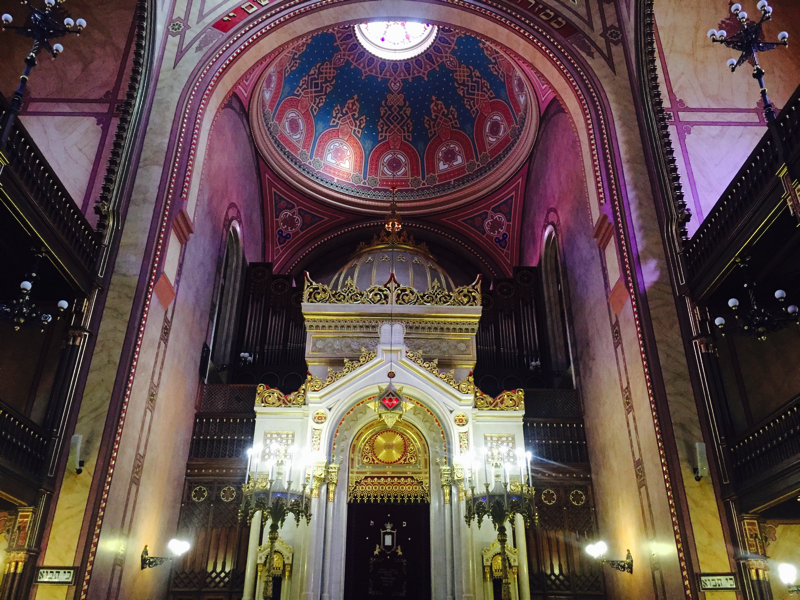 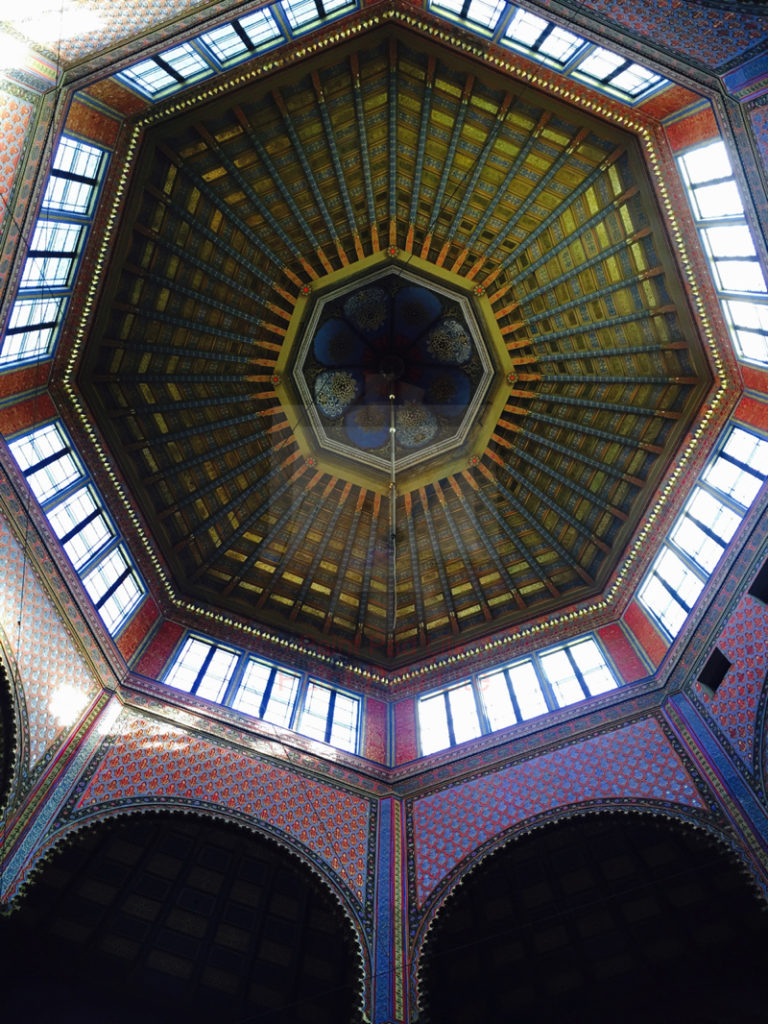 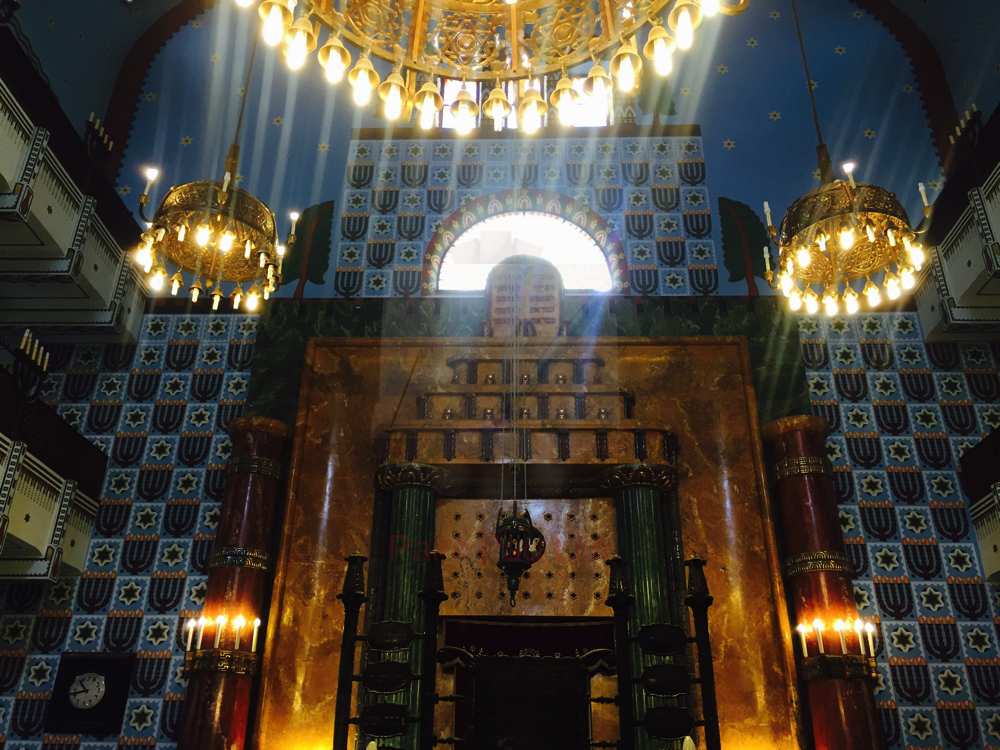 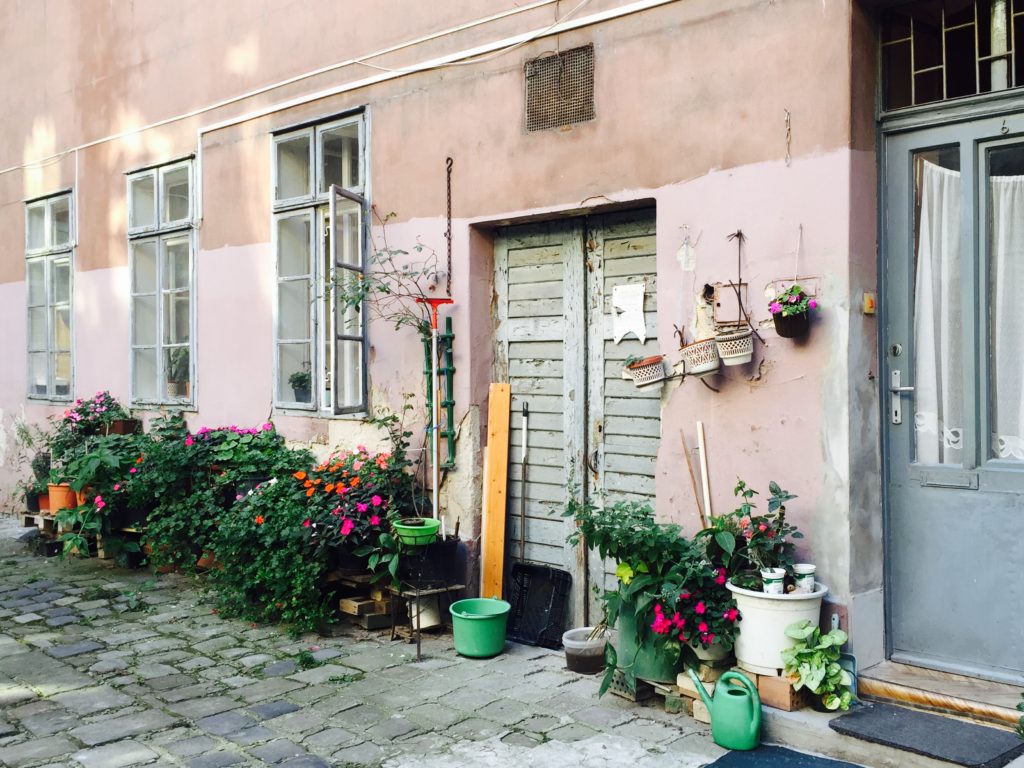 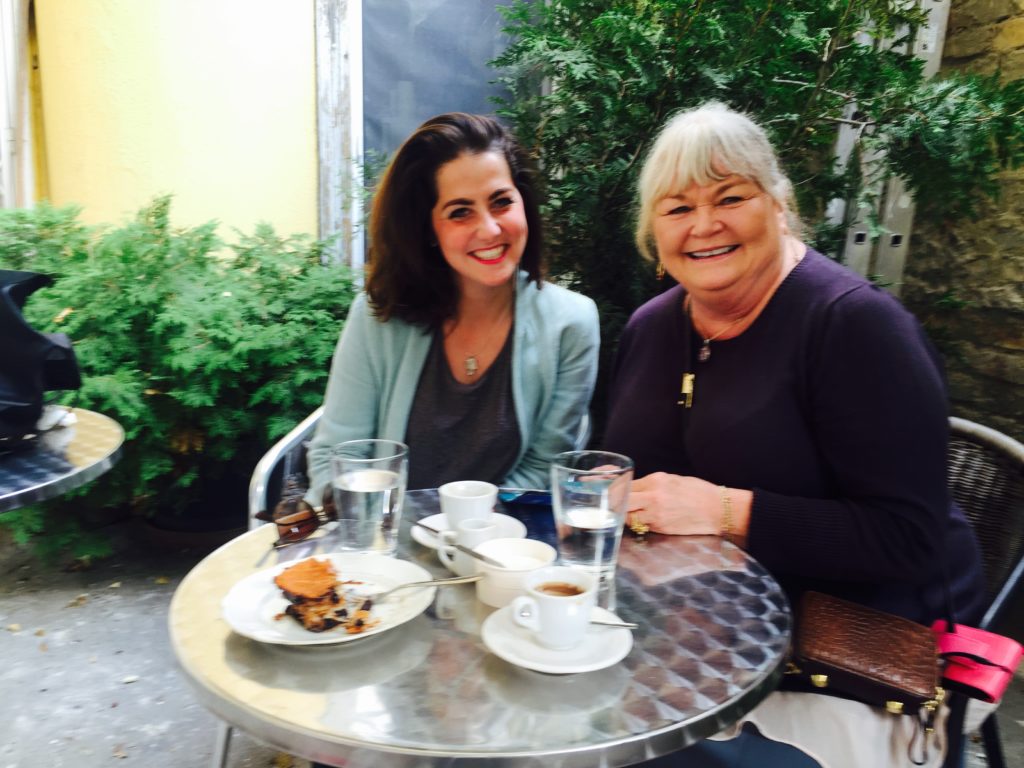 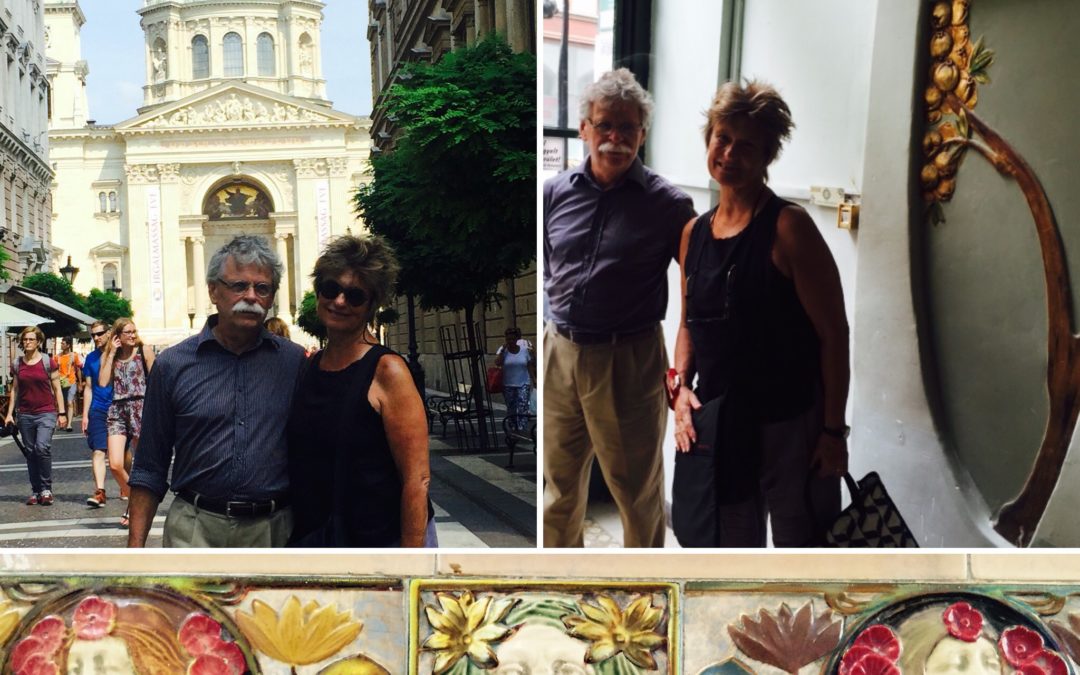 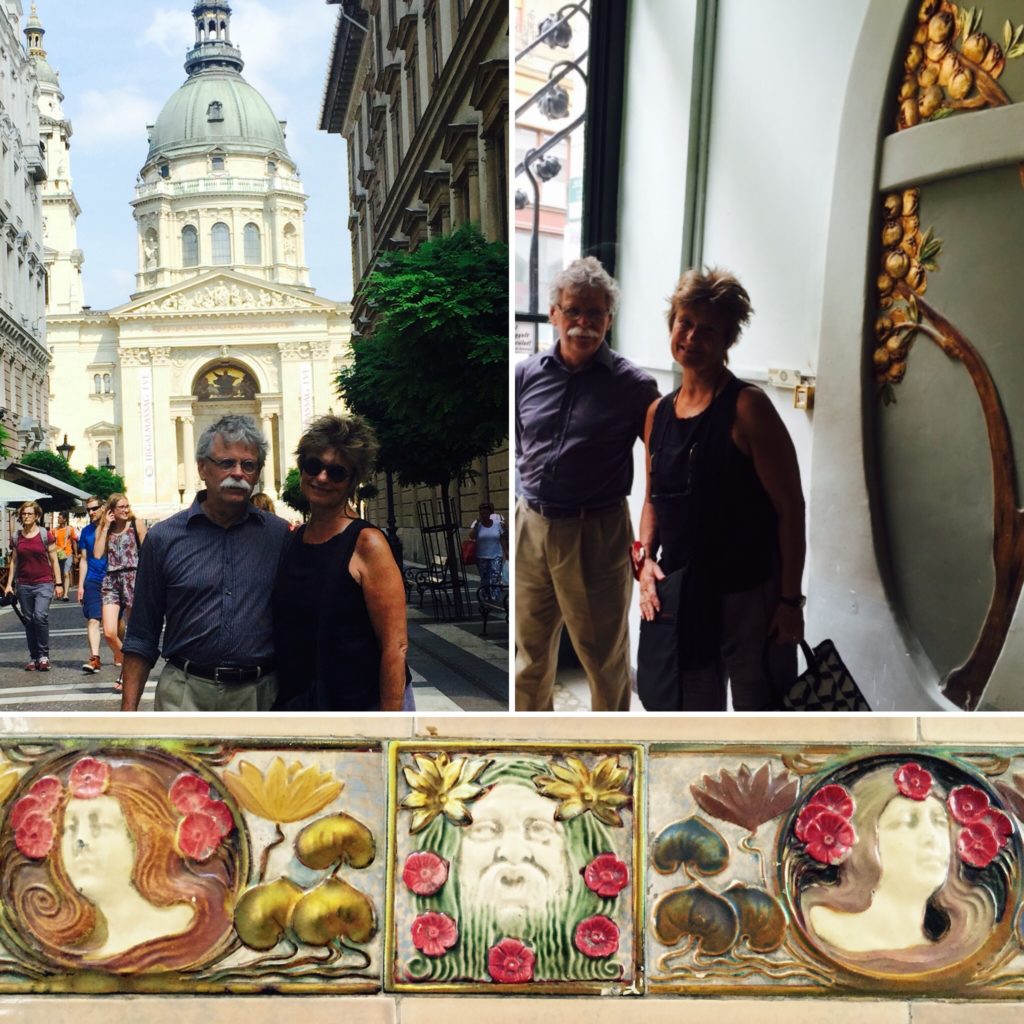 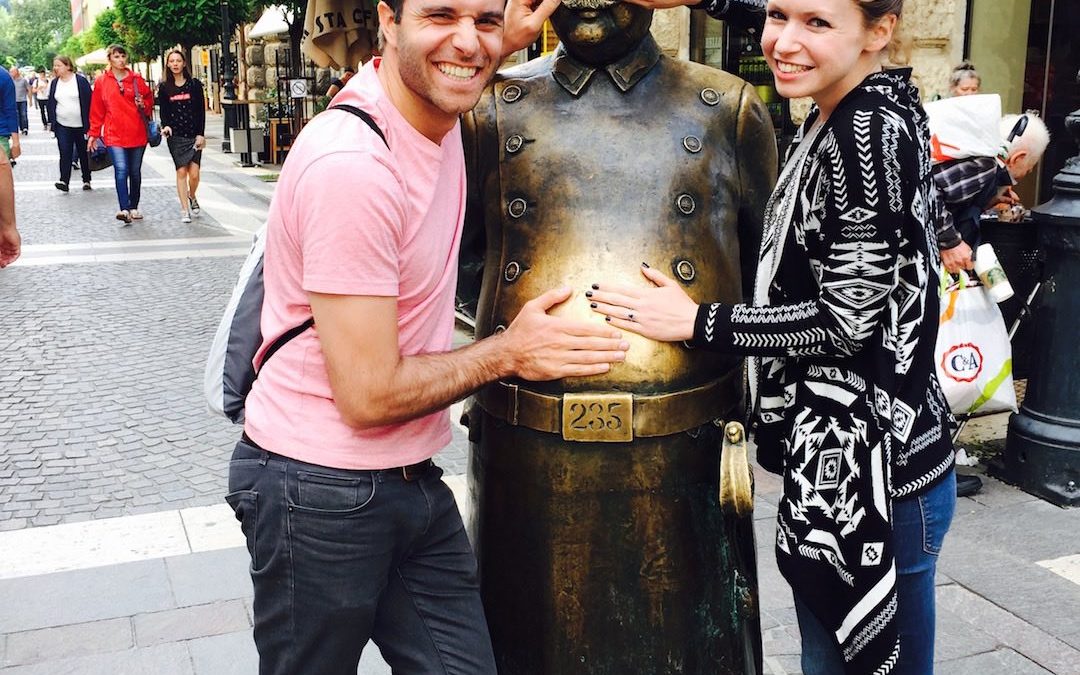 Brian dropped me a mail months ago that he read about me in the Guardian article and would like to book a tour with me on the special occasion that he and his wife are visiting Budapest on their one year-delayed honeymoon and they would like to have a walking-tour with me to get an introduction to Budapest on their first day at their first time here.

Finally I parked up with 3 bicycles in front of their rented apartment at 2 pm, 14th of July. I waited them with 2 heart-shaped marzipan bonbons placed on the saddle of their bicycles. When they came down, I IMMEDIATELY knew that they gonna be so fun. . . and of course they were! I also very much appreciated that they seem to form a perfect couple and this has such a nice feeling when you are with people who match so well. Simply good to see! 🙂 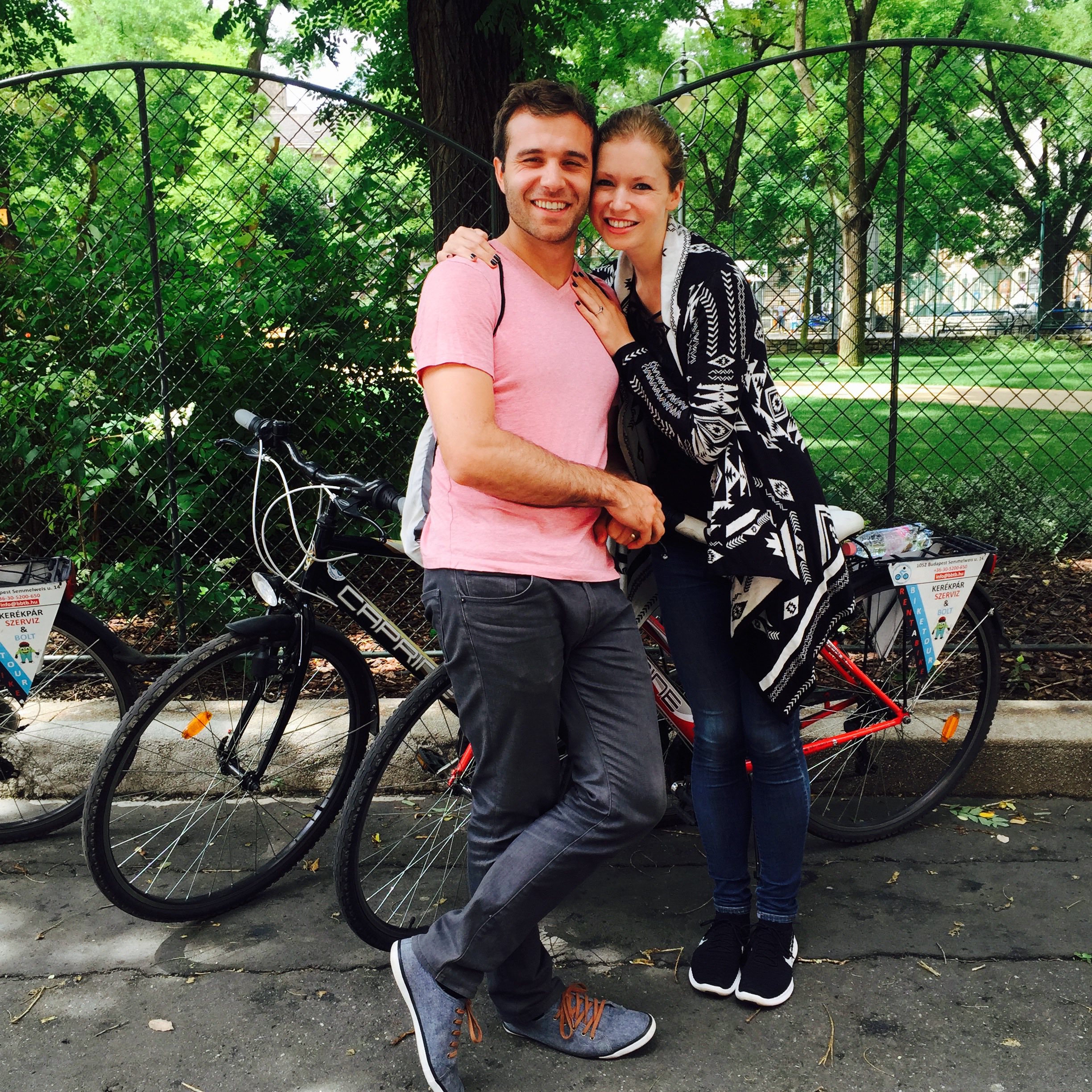 As our first stop we looked through the buildings at Kodály Körönd and wondered all how it is possible to have such beautiful buildings left abandoned. After also getting to know who really was Kodály himself, we carried on to Heroes’ Square and to the City Park. Naturally we didn’t miss the most romantic spot of the area neither, so we explored the Vajdahunyad Castle and its surroundings too.

After elaborately exploring the area we cycled back towards the centre and seen the sights on the Avenue, like the House of Terror, the Opera House and went to see also the Basilica, where we naturally couldn’t pass by the legendary police statue without rubbing his belly to bring us luck as well as his moustache that guarantees luck in your love life too 😉 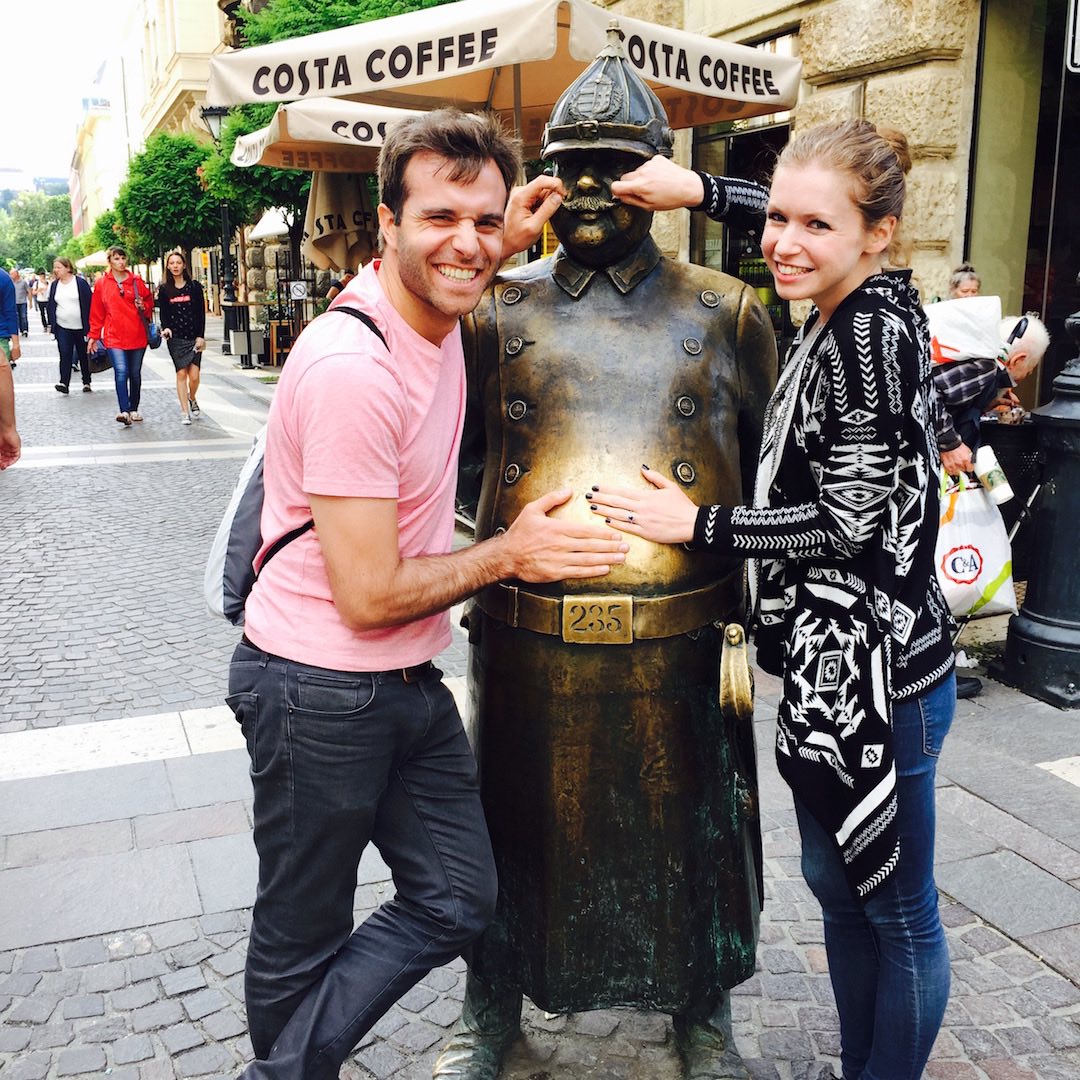 Finally we had to see the river before turning back that impressed us so much that we felt like that was the crown on top of the day.. and indeed it was with the Parliament building, the most beautiful jewel of the whole city.

We finally all got so thirsty that I invited the happy couple for a drink in one of the most popular ruin bars among locals. A non-touristy one fit into our day perfectly where we spent an hour at least in such a pleasant company. I gave them recommendations, and booked also a table for them for their dinner straight after the tour.

I hope to see you soon again ANDREA & BRIAN! 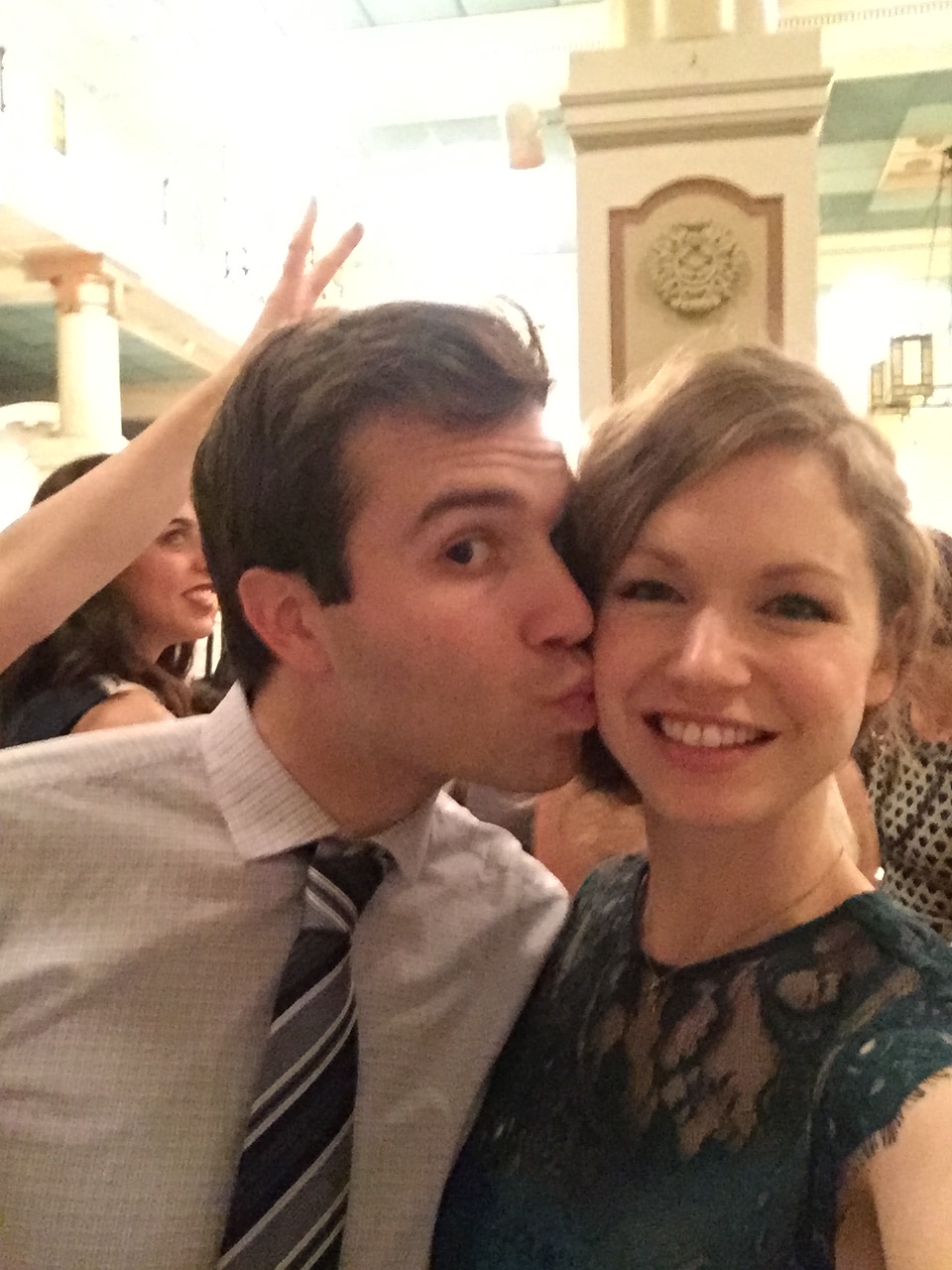